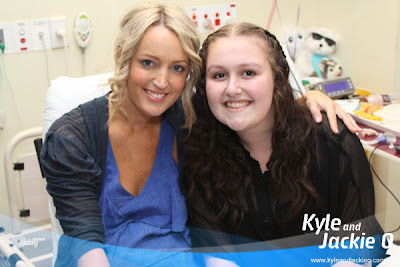 I was in there for a total of 3 and a half weeks and in that time i had met some incredible people! i had also been interviewed on the radio for a toy drive for kids staying in hospital over Christmas and met one of the lovely hosts from that show as seen on the right.

I now have chemo once a month and am due for my final treatment on the 4th of May! ( woo )
I am totally deaf in my left ear now.
I'm down to 3mg of pred (from over 100mg) and one antibiotic a day.

i managed to hang on to most of my hair ( thank god i had SUPER thick hair or i wouldn't be so lucky)
I'm back at school and starting to get back to normal!
i shall keep you posted on my progress!